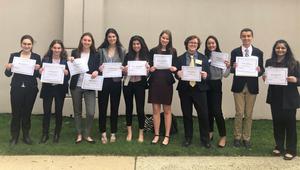 The three-day, YMCA-sponsored program provides a legislative simulation that has students acting as state senators, assemblymen, justices, lobbyists, members of the media and other political powerhouses.

“It is essentially a mock state legislature where students debate and vote on bills they have developed for the conference,” says David Della Fera, a WHS English teacher who co-advises the YAG Club with WHS history teacher Daniel Farabaugh.  “Our students prepare for months leading up to this conference.”

According to Della Fera, 27 WHS students were among the more than 500 students representing 20+ New Jersey high schools who participated in this year’s conference from April 12-14.  Traditionally held in the historic New Jersey State House in Trenton, the conference was relocated this year to the Renaissance Newark Airport Hotel due to renovations at the State House.