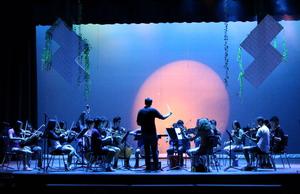 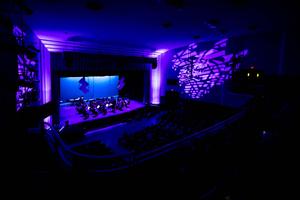 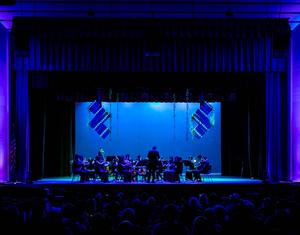 A recent visit from composer Stephanie Ann Boyd, along with a unique collaboration between students with interests ranging from music, technology, lighting, art, and design, combined to create an exciting learning experience at Westfield High School.

A recent visit from composer Stephanie Ann Boyd, along with a unique collaboration between students with interests ranging from music, technology, lighting, art, and design, combined to create an exciting learning experience at Westfield High School.

At its May 23 concert, the WHS Orchestra performed “Beyond the Gate,” a three-movement orchestral piece composed by Boyd that begins with a spoken poem.  Prior to the concert, as the student-musicians rehearsed with orchestra director Craig Stanton, a student technology and design team worked behind the scenes to create a compelling light show to match the magical music performed on stage.

“The students ‘painted’ their interpretation of the piece using LED stage lighting, conventional lighting instruments, and the student-built video panels as their tools and the auditorium as their canvas,” says district production manager Matthew DiFabio, who collaborated with Stanton on this immersive experience. “Unlike a painting, music is a linear art form. The student designers built lighting scenes accordingly to their interpretation for each given moment. Scene cues were then written into the sheet music so the cues were able to be recalled at the appropriate time during the performance.”

Intrigued by this approach to her music, Boyd decided to spend a day with the orchestra and theatre/technology students on May 17, watching the performance and providing insightful feedback to the students.

“Beyond the Gate is one of my most frequently performed works, but never has any orchestra taken its performance to such an interesting and engaging space for the audience,” says Boyd.  “When I attended the dress rehearsal and the first run-through began, I felt like Alice in Wonderland, full of awe and excitement at seeing all of these colors and shapes fill the auditorium; these hues and light designs so gorgeously matched to the music.”

The composer says that, as a former violinist, “writing for strings is my musical comfort food and the Westfield Orchestra's meticulous attention to the chromaticism in the second movement, their gusto in the intense harmonies of the third movement, and the finesse and delicacy in their playing of the opening movement were all wholly enjoyable for this composer to be able to bear witness to.”

“This performance is an impressive example of a 21st century student-centered collaborative STEAM project,” adds Thomas Weber, Supervisor of K-12 Visual and Performing Arts. “The students were encouraged to dialogue, experiment, problem-solve, build, design, create and perform.  I congratulate Mr. Stanton and Mr. DiFabio for providing this integrated learning experience for our students.”

For more on this unique collaboration, including a video showcasing behind-the-scenes footage, visit whstechdesign.