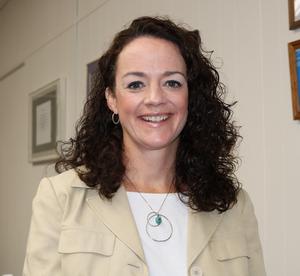 At its public meeting on June 25, the Westfield Board of Education unanimously approved the appointment of Mary Asfendis as principal of Westfield High School effective August 1, 2019.

At its public meeting on June 25, the Westfield Board of Education unanimously approved the appointment of Mary Asfendis as principal of Westfield High School effective August 1, 2019.

“In my formative years of teaching, Westfield Public Schools cemented my philosophy of education, showed me the value of school and community and pushed me to be the best professional I could be,” says Asfendis, in remarks at the board meeting.   “Fast forward twenty years later and I am so proud to represent this district which has given me so much.”

Currently Asfendis is principal of Roosevelt Intermediate School in Westfield, a position she has held since May 2017. Her career in the Westfield Public Schools began as a middle school Spanish teacher in 1999, a position she held until 2004.  From 2004-2012, Asfendis was the Supervisor of World Languages in the Bernards Township School District before returning to Westfield as an assistant principal at Westfield High School from 2012-2016 and assistant principal at Edison Intermediate School for the 2016-2017 school year.

“Mrs. Asfendis brings 15 years of educational leadership to the role of principal at Westfield High School.  And, as a former WHS assistant principal, she knows the school well,” says Superintendent of Schools Dr. Margaret Dolan.  “I am certain that she will be a dedicated leader with vision and commitment to the more than 1,800 students, their families, and the staff of Westfield High School.”

While an assistant principal at WHS, Asfendis supervised and evaluated the World Language, Practical Arts, and Special Education Departments, developed a variety of course offerings to suit both students and teachers, planned and implemented technology programs, initiated a diverse array of professional development for staff, and strengthened the partnership with the WHS Parent Teacher Student Organization (PTSO) by working collaboratively on various projects.

During her extensive career in education, Asfendis also has shared her knowledge as an educational consultant, providing workshops to school districts on the effective use of educational technology.

Earning a Master’s degree in Educational Administration and Supervision from Rutgers University, Asfendis also holds a Master of Arts in Teaching Spanish from Rutgers and a Bachelor of Arts in Spanish Education from Messiah College, PA.

In addition to Dr. Dolan and Human Resources Specialist Barbara Ball, the interview committee for the Westfield High School principal position included a high school assistant principal, two high school teachers, a high school parent, two district supervisors, and one Board member.  Prior to the interviews, the process also included conversations with various WHS stakeholders -- students, teachers, counselors, the WHS head custodian, and the principal’s executive secretary -- to collect their  thoughts on the skills and attributes necessary for the position.

“As Roosevelt’s principal, Mrs. Asfendis has learned a great deal about leading a building and she succeeded in building a staff community dedicated to professional growth, instructional excellence, and the social and emotional wellness of students,” says Dolan.  “She articulated a vision that endorses the team approach, and provides multiple opportunities for exploration and growth during the critical years of middle school.”

Asfendis will fill the position held by Dr. Derrick Nelson, who died in April after suffering complications while undergoing a stem cell donation procedure.

"While I am so grateful for this opportunity and the promise it brings, it comes at the end of a very difficult year for our community,” said Asfendis at the board meeting.  “We lost a friend, colleague and leader.  I was fortunate to have worked alongside Derrick and to have been his friend as we both became principals.  While we will always remember Derrick, I am grateful for the honor and privilege of helping Westfield High School move forward.”