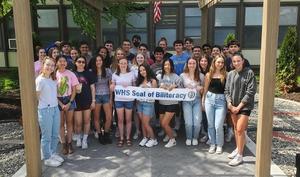 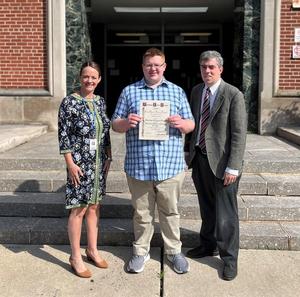 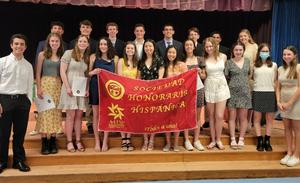 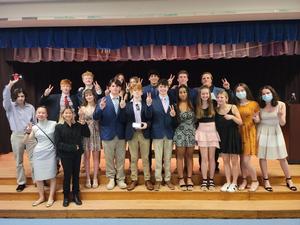 Congratulations to our World Language students and teachers for their many honors.

One hundred and eighteen Westfield High School 12th graders received the Seal of Biliteracy, an award granted to students who attain proficiency in two or more languages by high school graduation.

“I am happy to see the hard work of so many students recognized,” says WHS Latin teacher James Rowan.  “I am also very proud that Frank Wietry had a perfect score this year; it is not every year that Westfield High sees an achievement of that level, so Frank’s perfect score is praiseworthy indeed.”

WHS students in grades 9-11 also took the Italian National Exam in March, competing against over 3,000 students across the country in all 4 levels of Italian.  Eleven earned gold awards, 15 earned silver status, and 5 earned bronze awards.

In May, 82 students were inducted into the National Honor Societies for French, Spanish, Italian and Chinese, with 22 excelling in French, 23 in Spanish, 18 in Italian, and 19 in Chinese.

“We are very proud of all of these accomplishments,” says Enrique Pincay, K-12 Supervisor of World Languages and ELL. “The Class of 2022 had particular challenges to endure in the last couple of years. However, our students are resilient and they rose to those challenges, demonstrating how capable they are.”

Pincay praised the World Languages team as well, adding “These achievements also are a result of the unfading will of our world languages teachers who tirelessly worked to achieve the level of proficiency we expect from our students.”