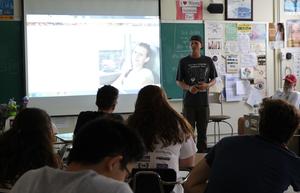 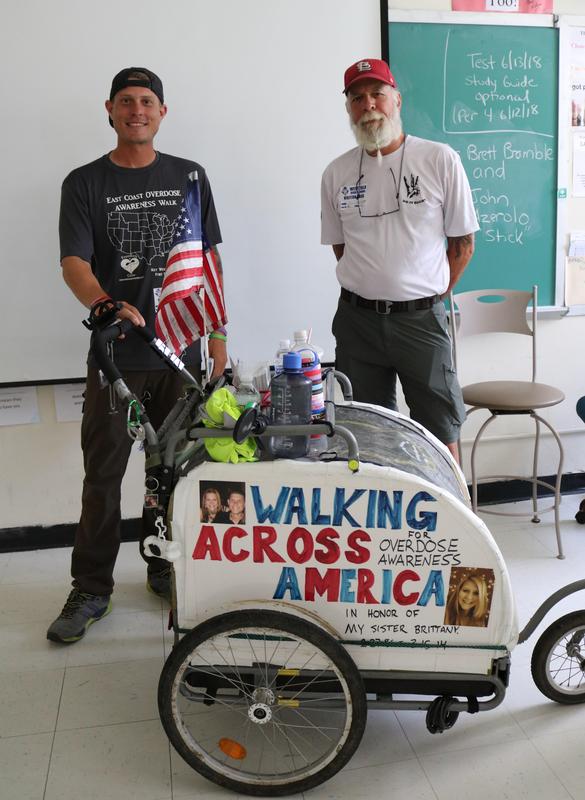 Speaking to WHS students on Friday, June 8, Bramble, whose aunt is a Westfield resident, detailed the reasons behind this arduous East Coast journey.  He spoke candidly about being molested as a teenager and his subsequent addiction to opioids and trouble.  And he spoke from the heart about his sister, Brittany, who became addicted to prescription painkillers and died of a heroin overdose in 2014.  Two years after her death, he walked 3,200 miles from the Atlantic to the Pacific Oceans to honor Brittany and to tell her story.

Having reached hundreds of thousands of people along the way, it was only a few months later that Bramble decided to start walking again, with Azerolo joining him.

“A victim of a drug overdose is not just a statistic,” Bramble told the WHS students.  “They are loved by someone.”

Bramble and Azerolo urged the teenagers to educate themselves about the dangers of drug use and to not be afraid to call 911 if they suspect someone is overdosing.   They described the many people they have met on their northward march, often someone with a tale of having lost a loved one to a drug overdose.

“The emotional weight that we carry,” Bramble said when asked about the most challenging part of this trip.  “We receive constant hugs and tears on the side of the road.”

“There isn’t a day that goes by that I don’t cry,” Azerolo added.

Yet, while “a huge challenge,” Bramble says it is one he and Azerolo welcome if they can continue to raise awareness to what they call “the drug crisis in America.”

“She’s dead.  She’s dead,” Bramble said starkly at one point, pointing to a picture of sister Brittany.  “Drugs did that.”

If the pair remain on schedule, they hope to reach Calais, Maine by early-to-mid August.  This walk, Bramble notes on his website, is “a small step in a greater purpose to start a transitional retreat that will help people recover from troubled pasts.”  To follow Bramble and Azerolo’s journey, visit brettbramblewalks.com.