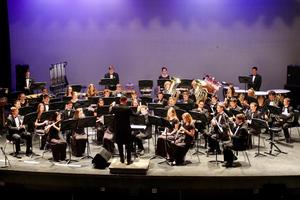 New Jersey Governor Phil Murphy congratulated a Westfield High School band on their invitation to perform and “have the honor of representing our Great State” at a national concert next month in Indianapolis.

New Jersey Governor Phil Murphy congratulated a Westfield High School band on their invitation to perform and “have the honor of representing our Great State” at a national concert next month in Indianapolis.

“I am incredibly proud to join with your friends, family and peers in acknowledging and applauding your dedication and passion, as it is indeed a unique accomplishment to be able to showcase your musical talents and achievements in this way,” the governor wrote in a letter to the WHS Wind Ensemble.

Westfield will be just the fifth New Jersey band to receive an invitation to perform at the annual Music for All National Festival which is now in its 28th year.  According to festival organizers, ensembles were selected “following a recorded audition process which was evaluated by a panel of nationally-esteemed conductors and music educators.”

“Our students are working tremendously hard in rehearsals and are devoting a lot of time to practicing and preparation, said Vitale. “We are looking forward to becoming part of a community of high school bands attending from all over the country that share the same drive and passion for music as our students at Westfield High School,”

The 50-strong band will travel across country by coach buses to Indianapolis, a journey that is expected to take around 12 hours, where they will join bands from 14 other states for the festival from March 14-16.

The high-achieving ensemble, which has received gold ratings at the State Concert Band Festival for seven straight years, previously has been invited to perform at the New Jersey Music Educators’ Conference and at Lincoln Center in New York.

The group will play music ranging from Fairest of the Fair by John Philip Sousa to a more modern piece, Black Tie Blu Bop by J. Scott McKenzie.

A statement from festival organizers Music for All says: “The Music for All National Festival showcases the finest high school and middle school music ensembles and student musicians in America, shining a spotlight on outstanding music-making and the importance of music education.”